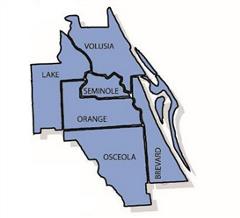 The North Central Region is responsible for the enforcement of insurance related crimes committed in Brevard, Lake, Orange, Osceola, Seminole and Volusia Counties. The region is divided into two auto fraud squads and one general fraud squad, directed by one captain and three lieutenants.

Major Lane graduated from Plant City High School in 1977. In 1986, he completed the police academy at Polk Community College. After receiving his Police Standards Certification, Carl began his law enforcement career with the Plant City Police Department, where he worked for 23 years. Carl worked in a variety of investigative assignments including, uniformed patrol, joint drug task force with DEA, criminal investigations unit, and joint efforts with the Hillsborough County Sheriff’s Office and Tampa Police Department.

Lt. Savino began his law enforcement career in 1982 with the New York City Police Department. He served as a patrol officer, narcotics investigator and was promoted to detective in 1989. Savino spent eighteen years investigating reports of sexual assaults and child abuse while assigned to the Manhattan special victims squad, and was promoted to the prestigious rank of 1st grade detective.

After twenty-five years with NYPD, Savino retired and joined the Division of Insurance Fraud in 2008. Since becoming a member of DIF, Savino has investigated personal injury protection (PIP) fraud and have made numerous arrests which have resulted in clinics being shut down. He is a member of the ERT team and a DTO since joining the Division. In 2011, Savino was assigned to a Federal Health Care Task Force for the Middle District of Florida, before becoming a lead detective for the newly formed PIP squad in the Orlando Field Office. In June, 2017, Savino was promoted to Captain over the North-Central Fraud Region.

Lt. Green began her career in law enforcement in 1997 with Orange County Corrections and later advancing her career to a Deputy working in patrol with the Orange County Sheriff’s Office in Orlando, Florida. She continued her career as state law enforcement officer for the Department of Motor Carrier Compliance, working as a compliance review officer, commercial motor vehicle homicide investigator, and an officer on radiological nuclear team and the hazardous materials team.

In May of 2008, Lt. Green joined the Division of Insurance Fraud and has supervised both Auto Fraud and General Fraud Squads.

Lieutenant Craig Weaver is a career law enforcement officer with 25 years of experience. He began his law enforcement career in 1992 with the Orlando Police Department. During his time at Orlando he held the rank of Sergeant and served a wide variety of assignments that included Patrol Division, School Resource Officer, Criminal Investigations Detective, and Property Crimes Task Force.

Erik Anderson began his law enforcement career in 2009 with the Department of Agriculture and Consumer Services in Jacksonville, where he worked in Patrol. He was promoted to Special Operations and worked on a mobile VACIS (Vehicle and Cargo Inspection System) x-ray truck scanning suspect vehicles for contraband. He was regularly deployed with US Customs and Border Patrol assisting with cargo inspections utilizing the VACIS x-ray truck. In 2011, he worked with the Department of Environmental Protection as a State Park Police Office in Miami.