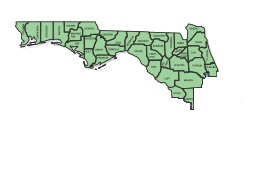 Major. Lane graduated from Plant City High School in 1977. In 1986, he completed the police academy at Polk Community College. After receiving his Police Standards Certification, Carl began his law enforcement career with the Plant City Police Department, where he worked for 23 years. Carl worked in a variety of investigative assignments including, uniformed patrol, joint drug task force with DEA, criminal investigations unit, and joint efforts with the Hillsborough County Sheriff’s Office and Tampa Police Department.

Captain Krista Gaston graduated from Florida State University with a B.S. Degree in Criminology. She started her Law Enforcement career with the Tallahassee Police Department in 1995. In 2001 she moved to Polk County where she joined the Lakeland Police Department as reserve officer. Krista returned to Tallahassee in 2008 and joined the Florida Supreme Court Marshal’s Office.

Krista started with the Department of Financial Services in 2013 as a Detective for the Tallahassee Regular Fraud Squad. Krista served as lead detective in that squad before being appointed Acting Lieutenant in May of 2016. Krista was later promoted to Lieutenant in February of 2017.

In December of 2019, Krista was promoted to Captain for the North Region of Florida.

Lieutenant Sandra Fitzsimons leads the Pensacola general fraud squad in the Panhandle Region. She has been with the division for over 18 years and has worked a variety of cases including major healthcare fraud and doctor cases with the Healthcare Task Force.

Lt. Fitzsimons is a career law enforcement officer with over 24 years of experience. Prior to joining the Division of Insurance Fraud, she served six years with the Santa Rosa County Sheriff’s Office. During her career there, she served in uniformed patrol, major crimes division and the SWAT team as a negotiator. In 2000, she began her career with the Department of Financial Services, Bureau of Insurance Fraud, as a detective assigned to the Pensacola office. She has been presented the prestigious "Bronze Eagle" award four times by the United States Attorney’s Office for her work with the Healthcare Task Force (2009, 2010, and twice in 2011). She also received the national "2009 Investigation of the Year" award from the National Healthcare Anti-Fraud Association. She was also given the "Prudential - Davis Productivity" award in 2011 for Notable Individual Achievements and is a Certified Fraud Examiner.

Lieutenant Barineau began his Law Enforcement career in 2010 with the Florida Department of Law Enforcement’s Capitol Police, where he served with the department’s Directed Patrol, Honor Guard, and as a full-time member of the Special Operation Team (SOT).

In January of 2015, Barineau started with the Division of Investigative and Forensic Services (DIFS) assigned to the Bureau of Insurance Fraud (BIF), in the Ft. Myers field office. In 2017, Barineau transferred to the Tallahassee Fraud office. In 2018, Barineau participated in a competitive process and was selected as a Bomb Tech Journeyman for the Division’s Explosive Ordinance Disposal (EOD) team. The following year in 2019 he became the Lead Detective for his squad,

Kyle graduated from Florida State University in 2009, having earned a Bachelor of Science degree in Criminology.

Kevin Jones has more than 30 years as a sworn law enforcement officer. He came to the Division of Insurance Fraud on July 19, 2004, and has been assigned to the Jacksonville Field Office since. He was initially tasked with investigating workers’ compensation fraud; he later did general fraud and worked as a member of a mortgage task force with the FBI. He was promoted to lieutenant in April of 2010 and he currently supervises the Jacksonville office. Prior to coming to the Division, he spent more than twenty years with the New York City Police Department where he retired as a Detective Sergeant in December 2003. Before joining the NYPD, he worked for the U.S. Secret Service Uniformed Division where he was assigned to the White House detail. Kevin is a graduate of the John Jay College of Criminal Justice in New York City and holds a Bachelors Degree in Security/Business Management.