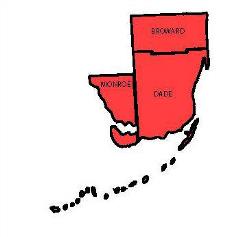 The South Region is responsible for the enforcement of insurance related crimes committed in Miami-Dade and Monroe Counties. The region is divided into two auto fraud squads and two general fraud squads, directed by one captain and four lieutenants.

Rafael Delgado has been a sworn law enforcement officer since January 1982, in which he served with the New York Police Department for 21 years before retiring and coming to work for the Department of Financial Services, Division of Insurance Fraud. Within the NYPD he was assigned to uniformed patrol, organize crime control bureau, detective bureau and an FBI Task Force Unit. He held the position of police office, detective and retired with the rank sergeant-supervisor of detective squad.

In 2005 he moved to south Florida and began a law enforcement career as a detective with the Department of Financial Services, Division of Insurance Fraud and was assigned to the Miami Field Office. While assigned there, he worked in a general fraud squad and personal injury protection squad. In August 2011, he was promoted to lead detective within the PIP squad. He is a certified field training officer, and has been an active training officer for new law enforcement detectives assigned to the Miami Field Office.

In April of 2014, Rafael was promoted to captain and assigned over the South Central Region, supervising five general and automobile squads.

Captain Cruz has over thirty years of law enforcement experience. Captain Cruz started his career with the New York City Police Department as a Detective 1st Grade, where he retired after twenty years of service. While with NYPD, he was assigned to several specialized units such as the H.I.D.T.A. Task Force and the Department of Homeland Security, El Dorado Task Force. Captain Cruz was a first responder to the World Trade Center during the attacks of September 11th. Captain Cruz then went to work for the State of New York Insurance Fraud Bureau where he handled a broad range of Insurance Fraud investigations while assigned to the FBI Health Care Fraud Task Force.

In 2012, Captain Cruz joined the Department of Financial Services as a member of the Miami Field Office PIP Squad and was later assigned to the Lead Detective position. In May, 2016, he was promoted to Lieutenant, and most recently as the Acting Captain of the BIF South Region.

In 2012, Lieutenant Oscar Sigler was appointed to the position of lead detective and after a competitive promotional process he assumed the appointment of lieutenant during September 2014. Sigler is a career law enforcement officer with over 33 years of experience. Prior to joining the Division of Insurance Fraud, Sigler served 26 years with the City of Miami Police Department. During his career there, he served in the uniformed patrol, special police, neighborhood resource officer, and internal affairs corruption units before retiring in 2007.

In 2008, he began his career with the Department of Financial Services, Division of Insurance Fraud, as a detective assigned to the Miami PIP squad. He has been nominated twice for law enforcement detective of the year by the Florida Insurance Fraud Education Committee in 2012 & 2013.

Jonathan Patterson has over nine years of law enforcement experience. He started his career working for the Florida Highway Patrol with a broad range of assignments, including FTO, DUI and Drugs investigator, and Emergency Response Team (ERT). Prior to starting his law enforcement career, he worked as a Lead Detention/ Correctional Officer for the Department of Juvenile Justice (DJJ). He then enlisted in the United States Army in 2004 and is currently a Sergeant First Class/Senior Drill Sergeant in the United States Army Reserves.

Lieutenant Stanley Jean-Felix attained his undergraduate degree from John Jay College in Criminology and his Master’s Degree in Criminal Justice from Florida International University. Lt. Jean-Felix is a certified member of the Association of Certified Fraud Examiners and a graduate of Southern Police Institute Command Officer Course.

Thomas "Tommy'' Fernandez has over 9 years of sworn law enforcement experience in Florida. He started his law enforcement career with the Division, as a Detective in the Division of Insurance Fraud, in September of 2008. Tommy obtained his Associate in Arts Degree from Seminole State College followed by his Bachelor's degree with honors in Criminal Justice from Florida International University.

During his time with the Division, Tommy has worked in P.I.P., Workers Compensation, and General Fraud. Tommy has worked proactive cases as an undercover detective and multiple major cases with U.S. federal agencies. Tommy is also a Field Training Officer.