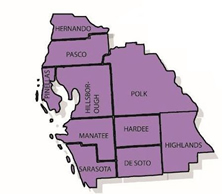 The West Central Region is responsible for the enforcement of insurance related crimes committed in Desoto, Hardee, Hernando, Highlands, Hillsborough, Manatee, Pasco, Pinellas, Polk, and Sarasota Counties. The region is divided into an auto fraud squad and two general fraud squads, directed by one captain and three lieutenants.

Major Lane graduated from Plant City High School in 1977. In 1986, he completed the police academy at Polk Community College. After receiving his Police Standards Certification, Carl began his law enforcement career with the Plant City Police Department, where he worked for 23 years. Carl worked in a variety of investigative assignments including, uniformed patrol, joint drug task force with DEA, criminal investigations unit, and joint efforts with the Hillsborough County Sheriff’s Office and Tampa Police Department.

Captain Green began her career in law enforcement in 1997 with Orange County Corrections and later advancing her career to a Deputy working in patrol with the Orange County Sheriff’s Office in Orlando, Florida. She continued her career as state law enforcement officer for the Department of Motor Carrier Compliance, working as a compliance review officer, commercial motor vehicle homicide investigator, and an officer on radiological nuclear team and the hazardous materials team.

In May of 2008, Captain Green joined the Division of Insurance Fraud, supervising both Auto Fraud and General Fraud Squads.

In December of 2019, Captain Green was promoted to the rank of Captain over the West Central Region and also serves as the Captain over the Disaster Fraud Action Strike Team (DFAST), charged with investigating instances of suspected hurricane-related insurance fraud.

Lieutenant Henry graduated from Winter Haven High School in 1981 and started his law enforcement career in 1988 with the Bartow Police Department. Prior to beginning his law enforcement career, Lieutenant Henry served in the military and completed a tour during Desert Storm/Shield. During his tenure with Bartow, he served in multiple capacities to include road patrol and detective in the robbery, homicide, and narcotics divisions. As a Detective, Lieutenant Henry was also assigned to the DEA Task Force/HIDTA where he worked undercover narcotics for several years and was instrumental in making numerous purchases of various illegal narcotics. Lieutenant Henry was promoted to the rank of Detective Corporal where he was supervising the detective units. Lieutenant Henry transferred back to the patrol division where he remained until his retirement in 2012.

Jada Robinson has over 9 years of sworn law enforcement experience in Florida. She started her career with the Florida Supreme Court before joining the Florida A&M University Police Department, where she worked patrol. She holds an Associated of Science degree in Criminal Justice and is currently pursuing a Bachelor's degree.

Jada started with the Division in August of 2011 as a Detective, investigating workers' compensation fraud. She is a certified CPR instructor, a certified First Aid Instructor and a member of the Emergency Response Team (ERT).

Michael “Mike” Scott began his law enforcement career in 2005, when he joined the Department of Transportation’s Motor Carrier Compliance, which later merged with the Florida Highway Patrol. While there, Mike worked Drug Interdiction (narcotics), as a K-9 Handler and served as a member of the Homeland Security Task Force.

In September of 2013, Mike joined the Division of Investigative and Forensic Services, in the Bureau of Insurance Fraud. He was assigned to the General Fraud Squad in the St. Petersburg Field Office. His duties consist of Evidence Custodian, BIF Lead Detective, FTO, DFAST Team Member, Homeland Security Task Force Member. Mike has been very successful in working large cases involving roofing scams, Bail Bondsmen, and Workers' Compensation premium avoidance cases. In October, 2019, Mike was promoted to Lieutenant over the General Fraud Squad in St. Petersburg.

Mike is a graduate of the University of Phoenix earning a Bachelor’s degree in Business Management.