This week, I released bill text for the upcoming legislative session, that once enacted, will protect Florida's small businesses from the IRS's political targeting. There are 87,000 new IRS personnel, and its only logical to think that some of those agents are going to target certain Floridians based on their political views. In my eyes, if you are looking to ruin someone's life, you have to have skin in the game, and if you try to shakedown Florida businesses, the State of Florida will have the tools to go after you too. 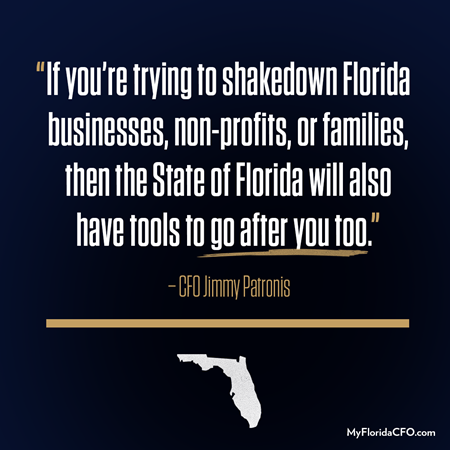 On Wednesday, in recognition of September as Suicide Prevention Month, I issued a proclamation that addressed the mental health issues faced by many Floridians, especially first responders. On a daily basis, Florida’s first responders answer the call and unfortunately, they often respond to situations where they are exposed to more terrible things than most people will see in a lifetime. These heroes stand on the frontlines of our communities, and they are here for us on our worst day and we have to be there for them on theirs.

Lastly, this Sunday, our nation will recognize the 21 year anniversary of the 9/11 terrorist attacks. We will never forget the thousands of innocent lives lost, the first responders who rushed into harm’s way to save as many as possible from the rubble, and the men and women who made the ultimate sacrifice overseas in their mission to seek justice during the War on Terror. Today, many Americans are still attempting to heal from the wounds of that fateful day. These heroes deserve our admiration, our love, and our respect. Please join me this weekend in praying for all the families who were impacted by the events of 9/11 and all those who have given so much to ensure the safety of our fellow Americans. We will never forget.