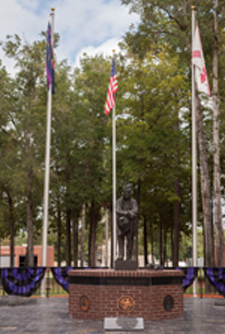 While visiting the Florida Fallen Firefighter Memorial, please remember that this small piece of earth is dedicated to the memory of those who have given their lives so that others might live!

— THIS IS TRULY HALLOWED GROUND —

In the late 1980's, shortly after funds were appropriated for the Florida State Fire College, Fire Chief John Wright, now retired from the Deland Fire Department, proposed that a memorial be erected at the Fire College dedicated to those firefighters who had made the supreme sacrifice while serving the State of Florida. Within two years, over $50,000 had been collected from donors who came from all walks of life, including career and volunteer firefighters of every rank, civilians and fire service organizations. Virtually every firefighter in Florida contributed to the memorial fund.

Artist Don Murray of Gainesville, Florida, whose father was a firefighter, was commissioned to create the statue that has become the focal point of the Florida Fallen Firefighter Memorial. The life-size bronze statue of a firefighter does not depict the typical heroic pose we often see, but is instead modeled in a pose keeping with the purpose of the Memorial, that being a "Firefighter at Rest". The base of the Memorial was designed by Florida State Fire College Staff, and was constructed by them with assistance from professional masons.

In 2013, the Governor and Cabinet of the State of Florida approved a resolution authorizing the placement of a Firefighter Memorial Monument on the grounds of the state Capitol. Previously, Florida’s Fallen Firefighters were recognized at the Capitol on a Wall of Honor located on the Plaza level of the Capitol. 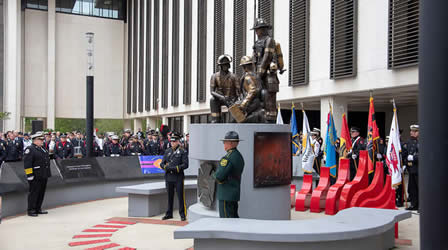 The Joint Council of Fire and Emergency Services was named to lead the effort. Fundraising began, and renowned sculptor Michael D. Jernigan was selected to create the base and the bronze statues.

This memorial is a complement to the existing fallen firefighter memorials located on the grounds of the Florida State Fire College and the Florida Forest Service Training Center.

The Firefighter Memorial Monument was dedicated on April 1, 2019 and stands proudly in the courtyard of the Florida State Capitol.

It is recognized that Post Traumatic Stress Disorder (PTSD) and mental health/illness poses a real struggle to many fire service members. Therefore, markers will be added at the memorials to acknowledge the loss of lives gone too soon due to the tragic events regarding firefighter mental health. The absence of names on these markers symbolizes the silent struggles of PTSD a firefighter may face throughout their career in the fire service.

Firefighters to be honored on
November 18, 2022